“I’ve not met an immigration minister since the last government – the May government.”

The Conservative government dismissed the accusations and said that attempts by Scotland to appear constructive were “disingenuous and another attempt to further the cause of independence.”

Macpherson claims that he has written to different UK immigration ministers on a number of occasions including to Brandon Lewis on two occasions, to Seema Kennedy and to Kevin Foster three times, as well as to Priti Patel.

“I’ve had some responses in writing but no positive responses to a meeting, no phone calls, nothing…

I think it’s astonishing and deeply disrespectful to the devolution process that an issue as important as immigration has not been engaged with by the UK government – who in other areas of government policy do have at least some regularity of inter-governmental exchange.

I would encourage them and urge them to engage with myself and my Welsh and Northern Irish counterparts on these very important issues.” 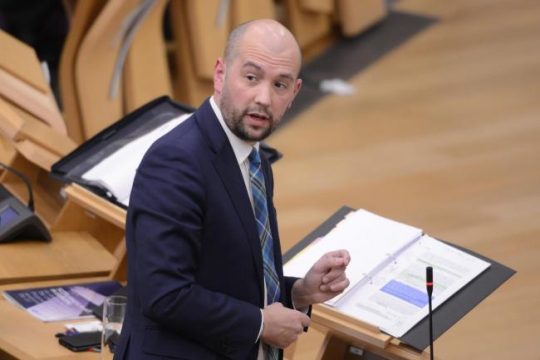 Ben Macpherson claims he has written to several Westminster ministers regarding the future of UK immigration and has received no positive responses. [Image credit: The Herald]

“Ideological and not logical”

Macpherson has accused Westminster politicians of being “ideological and not logical” in regards to the post-Brexit immigration system.

He claimed that there will be a much more restrictive environment under the new system, which will make it more difficult for UK employers to hire the people they need to prosper and succeed.

He also warned that “tailored solutions will be increasingly required in Scotland when free movement for EU workers ends.”

The Scottish Conservative MSP, Oliver Mundell, hit back at Macpherson, blasting his assertions.

“No-one is disputing the need for solutions and creative thinking across immigration….

However, to try and pretend that this is a constructive approach when it’s yet another example of the Scottish government refusing to recognise the constitutional settlement in the United Kingdom and another attempt to further the cause of independence, I think is disingenuous.”

Whilst Macpherson has insisted that he has attempted to “reach a compromise” for the wider benefit of Scotland and to improve the UK immigration system as a whole, there are some who see the problems at hand.

Co-leader of the Scottish Greens, Patrick Harvie, warned that the SNP and Westminster have very different objectives, making compromise difficult.

“Even with the best will in the world, if both governments wanted to co-operate and meet together and discuss properly, they appear to have fundamentally different objectives.”

“The UK government wants to significantly reduce immigration, operates a hostile environment and is ending free movement in order to achieve that objective whereas the Scottish Government welcomes immigration, values it and doesn’t want to turn off the taps in that way.”

Do You Need Immigration Legal Assistance?

With a wealth of experience in the complex field of immigration law, we have been serving the people of Birmingham for many years.

If you are worried about your immigration status or need any assistance during these troubling times, please do not hesitate to get in touch on 0121 718 7022.

We can meet you in our Birmingham office or, alternatively you can speak with one of our immigration lawyers remotely.